Get fresh music recommendations delivered to your inbox every Friday.

by The Montgomery Cliffs 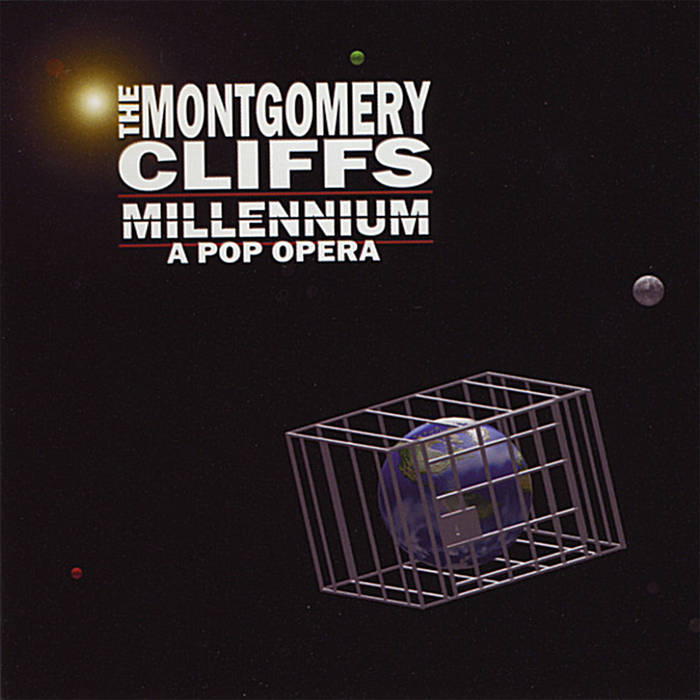 "Here is our rock opera. It was recorded not long before 2000... on an old Roland VS 1680 in my basement. It was released by Greg Colburn of RPM/USA in 1999. Greg was one of the good guys... No... a GREAT guy who had helped us put out our indie releases.... Self-titled... The Christmas EP.... and this. He gave us our start on his 3 Minute Revolution comp before we began recording Andiamo for 115 Records." - Joey Salvia

Salvia produced this one with The Cliffs from a batch of songs he'd put together. Later, Andy Bopp was called in to help with overdubs and mixing after Joey almost had a nervous breakdown engineering, writing, recording, and mixing it.
Joey Salvia wanted to do a rock opera... and so here it is. This overly ambitious effort was a departure from the critically acclaimed debut, Andiamo! It was released to mixed reviews... mostly leaning towards- WHY? Of course, like all self-indulgent works of sonic art, it's meant as a full-listen as an under the headphones kind of experience but, that's asking a lot these days. Still, give it a try. You might just enjoy something you've never heard before... A power pop/rock opera... years before Green Day decided to do one.

A concept album in the tradition of those who invented the genre: late '60s Who & Kinks, early '70s Bowie, touches of early Yes and Genesis with a hint of Elvis Costello.


About the Artist
"The Montgomery Cliffs are a three-piece band from Long Island who play fast, tight-as-hell pop songs with humor and gusto; imagine Elvis Costello and the Attractions (in the early days) or the Jam, and you're getting warm." Colm Clark, TMN News Feature
The Cliffs debut album "Andiamo" was a critical success and took home Best Indie Rock Album at last year's Long Island Music Awards.


5.0 out of 5 starsGreat combination of musical styles & excellent songwriting!

Greg Colburn and his RPM USA label have put out a gem. It is a "concept album," which some may find challenging, but it's a really fine collection of songs that could just as easily have been a Broadway musical as a rock/pop album. The production (by the band) and performances on this album are top-notch. It's a step up (and away) from Andiamo!, the band's very fine debut. The album is expertly mastered by Dutch Nachodsky, who has done great work with Splitsville in recent years.

Joey Salvia (lead vox, bass, keyboards) and bandmates Wayne Kurz (guitars) and Dennis Carollo (drums) sound as tight as a group that's been around for years, while telling a tale that developed in Salvia's head less than a year ago. The playing is varied throughout and many different styles are used on the album, with lots of pure pop, some angry punk, echoes of Rush power chords, Styx-ish acoustic guitar, and Elvis Costello-influenced vocals. A children's choir even appears on one track!

Although the album opens with an uncertain picture of the Earth and its future (2000 Years), it has a happy ending (Follow Your Bliss). Along the way we get a number of straight-ahead pop rockers that would work on any album, concept or not. For me, the highlights are the garage rockin' sounds on 1964 and Serve You, Salvia's delicate piano on the heartbreaking Worlds Away, and the melodic popcraft of Only, which is clearly destined for heavy rotation. These songs fit very nicely into their live set, which you should check out if you get a chance. I expect that this album will get The Montgomery Cliffs a lot of attention...

4.0 out of 5 starsThis new album proves the wide range of The 'Cliffs talent-

Format: Audio CD
I was working the door at a club when I first heard these guys and as soon as they took the stage in their slick suits I knew they meant business. But I didn't know how much until they started playing! I was blown away by their soaring jams and killer melodies. Their positive playful attitudes were refreshing and connected with the crowd instantly. I bought their album as soon as they left the stage. I was psyched to hear that the ballsy, energetic show was captured on their disk. And even though they told me that the disk was made on a low budget, the sound quality was great. Their DIY and no excuses attitude furthered my alleigance to these warm and extremely friendly cats! This new album is a great leap in style and vision that most up and coming bands wouldn't have the balls to release. Whereas 'Andiamo' was tongue in cheek and had more of a 'party' feel, 'Millenium' is more experimental and the lyrics are poignant and touching. But don't get me wrong, this ain't no wussy new-age sap-fest. This album is on par with The Who's Tommy and Quadrophenia. If my review doesn't convince you, listen for them on 92.7 WLIR and/or call up the station and ask/demand to hear it! These guys are gonna put the Long Island music scene (back) on the map.

Format: Audio CD
I first recieved this cd by mistake when ordering their self titled one. I was immediately captured by the overall quality of the songs. Most of the album cuts can stand alone and believe me there are plenty of them. This cd has grown on me to the point that it is frequently in my cd player, especially in my car. It is just one of those cds that after a few listens begins to kind of creep into your soul. The song Another Soul On My Side has the best( and I mean Best)guitar solo I have heard in years from any band period. I highly recommend this cd and would have given it 5 stars but those cds are rare indeed. This is definitely 4 and a half or bettter though.

The Cliffs began working on the music that was to become their award winning 1997 debut album in mid 1995. They were a power- pop trio from NY. Here is a collection of remastered recordings from those sessions and more. The original debut was produced by Andy Bopp and mastered by Bob Ludwig for 115 Records. Managing member: joeysalvia@yahoo.com ... more

Bandcamp Daily  your guide to the world of Bandcamp